Two ingredients from the same family; with similarities, but also differences. Do you know what each one is for?

Those who have no experience in cooking can only notice the most obvious: the color difference. But they do not know that between the red and the white onion there is a world of differences. One is part of our culinary DNA —the dressing we use in Creole dishes—, while the other is only found in some preparations, most of them imported, such as onion soup or pizza. Here we explain the characteristics and the best way to use each one.

The onion family is very large. In fact, it is not difficult to associate them with garlic, for example, Chinese onions, or green onions; all of them are from the genus Allium. The two that we are going to describe, the red and the white, are of the Allium cepa species and are characterized by having a prominent bulb, which consists of several layers, which are what we can see when we cut them in half. But that’s where the similarities end.

It is the most produced in our country (approximately 85%), especially in Lima and Arequipa, the latter region that produces, according to experts, the best onions in Peru. Their size and shape can determine their use: larger ones are used for garnishes, while smaller ones work best eaten fresh.

The red or purple color is located only in a thin membrane that is in each layer that gives shape to the onion. A color that is lost when it is cooked in the dressing, but that gives a beautiful color to some preparations, such as salads or sauces, such as the sarsa criolla that we use to accompany beans, tamales, or bread with pork rinds. Or also in the logo saltado, cut thick and barely passed through the fire, so that they are crispy.

Its flavor is intense —more than that of its white sister—, which is why many people soak them in cold salted water or drain them under running water. It all depends on how strong the onion is —each one is different— and what it is going to be used for. In ceviche, for example, fresh thinly julienned is used, while in causa, or pico de gallo, it is diced small (finely). 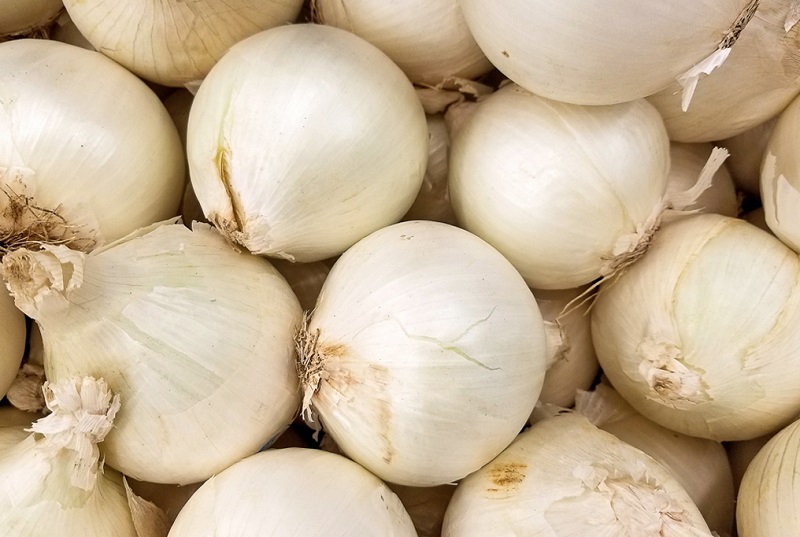 If the red represents 85% of the Peruvian market, the white represents the remaining 15%. It is therefore not the most popular. Its flavor is milder than that of its red sister, and its measurements are more even. Of course, under this category, there are at least three varieties, one very white, another slightly greenish, and a third yellowish.

These onions are slightly sweeter than the red ones, which is why they are eaten fresher, especially in salads. They are also used in onion rings (battered onions), in potato tortillas with caramelized onions, in pizzas, and an onion soup, preparations brought from abroad that we have incorporated into our culinary background and have adopted as our own.